I can’t quite recall what I was searching for a few months ago (I think it was something to do with the Hog’s Back) when I came across this article from the 17th January 1884 edition of the Timaru Herald, the newspaper of a small town on the South Island of New Zealand (still very much in business as its website proves). To my astonishment, it makes mention of how Puttenham church “stands on a Celtic burial-place”. It is clear that the article’s author derived this information from the observations of Charles Kerry, whose journals record his finding Roman pottery and worked flints in and around the church between 1869 and 1871, leading him to the conclusion repeated by the author of the article. How it came to the attention of the latter is much less obvious. The most likely explanation is that they derived the information from Edward Walford’s revised edition of W E Brayley’s A topographical history of Surrey published around 1878; he asserted that Roman pottery and coins had been “dug up” in the churchyard (volume 4, p 305) – the latter is almost certainly not true, and perhaps reflects Kerry’s discovery of a coin of “Hadrianus” on the Hog’s Back west of the upper portion of School Lane in 1872.

My satisfaction with the results of Kerry’s antiquarian activity having made it to the other side of the world was further increased when, while attempting to relocate the article, I discovered that it was in fact syndicated from no less a title than The New York Times. Its online archive incorporates the same article, but whose publication date is given as 20th November 1883. It is possible that this was itself a repetition or paraphrasing of an earlier piece published in a London newspaper, but given the closeness of the publication date to the “excavations” at Taplow it may well be that it was an original for the American newspaper, albeit one perhaps authored by its London correspondent. (Puttenham made a reappearance in the newspaper 128 years later, in the far less dignified context of a report about the “public sex environment” adjacent to the A31 lay-by.)

The Anglo-Saxon “princely” burial at Taplow was investigated in autumn 1883 in what by modern standards was a terrible (indeed at times shambolic) excavation. Joseph Stevens’ account of the discoveries was published soon after in the 1884 volume of the Journal of the British Archaeological Association, available online via Internet Archive; a recent objective overview of the artefacts is given in this 2001 factsheet by Leslie Webster. Despite the unpropitious circumstances of their recovery, most of the grave goods are in a good state of preservation, and are on permanent display at the British Museum. I was lucky enough to see them when I was up in London over the summer, and here’s a photo of some of them I took at the time to finish with… 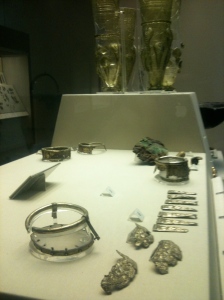